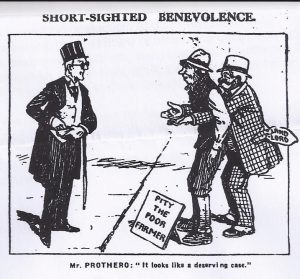 This cartoon appeared in the radical London evening newspaper, The Star, must be understood in its context.

At the time of the Great War, Britain was very far from self-sufficient in food production, and the then German submarine campaign, which had been stepped up in 1917, seriously threatened external supplies. It was very important to do everything possible to increase home food production. At that time (unlike today) the large majority of farmers were tenants, and many of them were quite poor. Agricultural labourers, who were employed by the farmers, were much more numerous than now, and most of them were even poorer. Until 1917, there was no control on rents which an agricultural landlord could exact from his tenants.

When this cartoon was drawn, Rowland Prothero was President of the Board of Agriculture in the Coalition government. Legislation was being passed which controlled agricultural prices and also – for the duration of the war – farm rents. The cartoon suggests that, in the long term, any benefit designed to help the farmer would accrue to the landlord.  Roy Douglas