Most modem taxes are simply ways of plucking the taxpayer goose in a way designed to get the maximum number of feathers for the minimum number of squawks. Nearly all of them are open to serious objections. Many, such as VAT, are patently unfair because they fall most heavily on those least able to pay. Even an apparently fair tax like income tax, which is graduated according to earnings, is often dodged by people who can afford to pay expensive accountants or set themselves up in a tax haven.

Getting to the roots
If we want to devise a tax which is really fair, we first need to consider how the

economy works – how wealth is produced, and what gives people a right to it. All wealth ultimately comes from the same source: from human effort (physical or mental) utilising natural resources. In the language of economics, Labour is working with Land.  Food, shelter, clothing, transport, everything we need, can only be produced by exerting Labour on Land. Often people exert their labour upon land to make something which will help them produce more wealth . This is called Capital, whether something simple, like a spade, or very complicated, like a computer.  Labour and Capital are both active in producing wealth. Land is inactive – it simply provides access to location and natural resources.

Devising a fair tax
All taxes must be levied on Labour, Capital or Land. There is nothing else that can be taxed. On which of these three factors of production can taxation fall most justly, and also cause the least harm to the economy?
Taxes which are supposed to fall either on Labour or on Capital are very often “passed on” to somebody else who is not supposed to be the taxpayer at all.  Even if they fall where they are intended to fall. they usually have the side-effect of discouraging people from doing useful, productive, work.
The only way of collecting taxes without harming production – and also without risking them being “passed on” – is by imposing them on the third factor, Land.
Land is very different from both Labour and Capital. No human being has made land, and therefore no human being has a better moral title to land than anybody else. Yet, for all kinds of historical reasons, most of the land which is useful for production or habitation has been claimed by some person or group. A person who exerts Labour, or a person who produces Capital, has a moral title to the value which he or she has given. Surely it is more just, (as well as better economic sense) to tax people on the basis of value which they enjoy but have not created, rather than on the basis of value which they have created by their own efforts, physical or mental? It is vital to remember that all human life depends on the right to exert that effort to obtain food, water, clothing, shelter and so on from the environment – that is, from Land. In other words, nobody can enjoy any of those rights unless he has access to Land because without Land he cannot live at all. 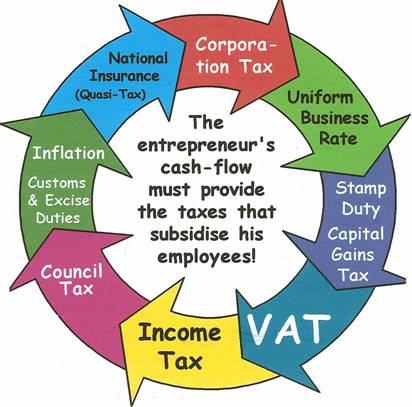 Redistributive Taxation
The consequence of an unfair distribution of land has inevitably been an unfair distribution of wealth, which at different times has meant abject poverty for large sections of the population in almost all countries of the world. In some countries, governments have sought to rectify that state of affairs by complicated systems of redistributive taxation, designed to take some of the wealth off the rich and use it for the benefit of the poor. But these schemes have seldom worked in the way intended. The taxes levied on goods and services in the cause of a fairer distribution of wealth make it more difficult to produce those goods and provide those services, thereby reducing the over-all wealth available for distribution. Very often the benefits which governments provide with one hand (such as unemployment benefit, housing benefit, children’s tax credits and so on) are taken back with the other (VAT, Income Tax, National Insurance contributions and so on.) The processes of collecting and distributing benefit are themselves very expensive, and add to the total burden of tax required. And there are innumerable cases of people who don’t deserve benefits getting them, and of people who do deserve those benefits being denied them. It is probably quite literally true that everybody in a country like Britain, from the very richest to the very poorest, is being taxed, and is receiving benefits, at the same time!

A fair taxation system
A fair (and sensible) taxation system should start by recognizing the equal moral right of everybody to land. It is not possible to share out all land equally, even if it were desirable to do so, but it is possible to ensure that everybody receives his or her share of the value of land by taking the burden of taxation off production and collecting instead the value of land. That can be done by what is known as a Land Value Tax. Different pieces of land have different values. A piece of fertile land is much more valuable for a farmer than a similar piece of bare rock. A piece of land in the middle of a busy town, with permission to build on it, is vastly more valuable than the best farmland. The value of a piece of land has little or nothing to do with what the owner of that land has done. It derives either from nature or from the community. Nature makes one field more fertile than another, the community provides transport, schools, shops and so on which make one place more valuable for living or for doing business than another. In order to apply land value taxation, all land must first be valued. This is already done in some countries. The valuation would ignore the value of improvements that people have put on the land, like crops, added fertilizers, roads, buildings or machinery. As land values change from time to time, it would be necessary to revise the valuation periodically. Once the valuation is complete, an annual tax would be levied on the basis of that valuation.

Why Land Value Taxation is Fair
Land Value Taxation (LVT) would be fair for two reasons. First, it is taxing people on the basis of some benefit which they enjoy which they have not created. By contrast, modern taxes often collect money from people for benefit which they have created – like income tax – which takes money from people who have worked for it. Other modern taxes, like VAT, collect money from people not when they’ve earned it, but when they want to spend it on goods or services. If LVT is introduced, it will be possible greatly to reduce these unfair taxes.
LVT remedies the land robbery which took place centuries ago, but which continues to harm the lives of most human beings today. It ensures that nobody gets an unfair share of natural resources, or of value which the community has created, and it will allow enterprises to prosper.