It is neither desirable nor possible to achieve complete equality between human beings. Where inequality arises because some people work harder than others, or use their talents better, there is no problem. But the really gigantic gaps between rich and poor, both in this country and in the world outside, are nPandora Charms UK ot attributable to different attitudes to hard work or differences of skill, and are neither desirable nor necessary. These gaps arise because some people contrive to take the result of other people’s wealth. How do they do it?

In tracing the causes and effects of inequality, we need to have in mind the dynamic forces shaping our society. 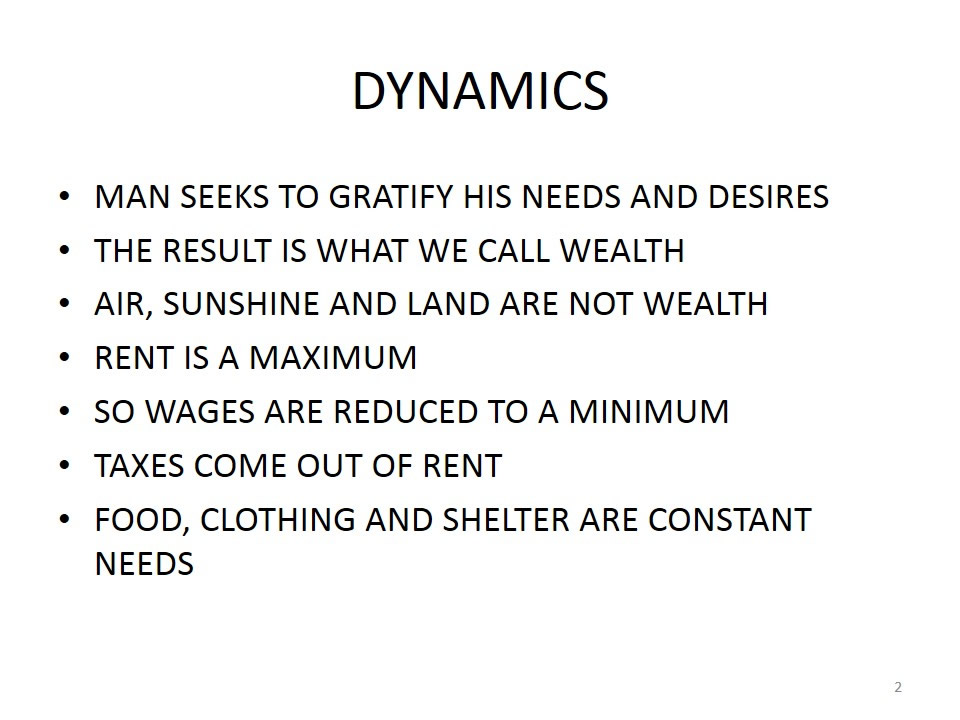 And also, to define our problem 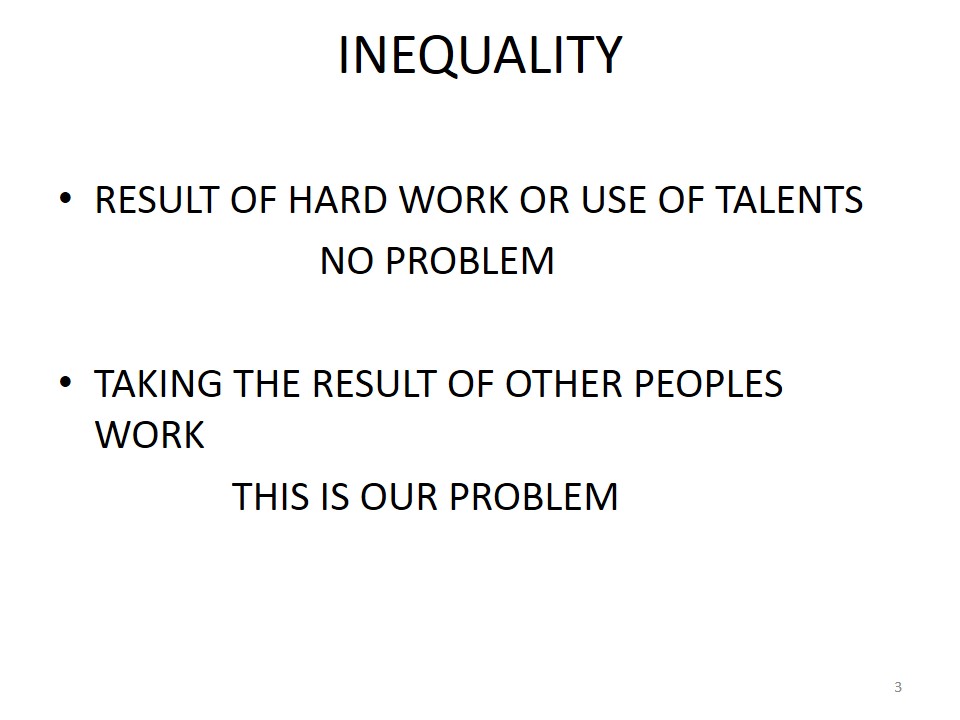 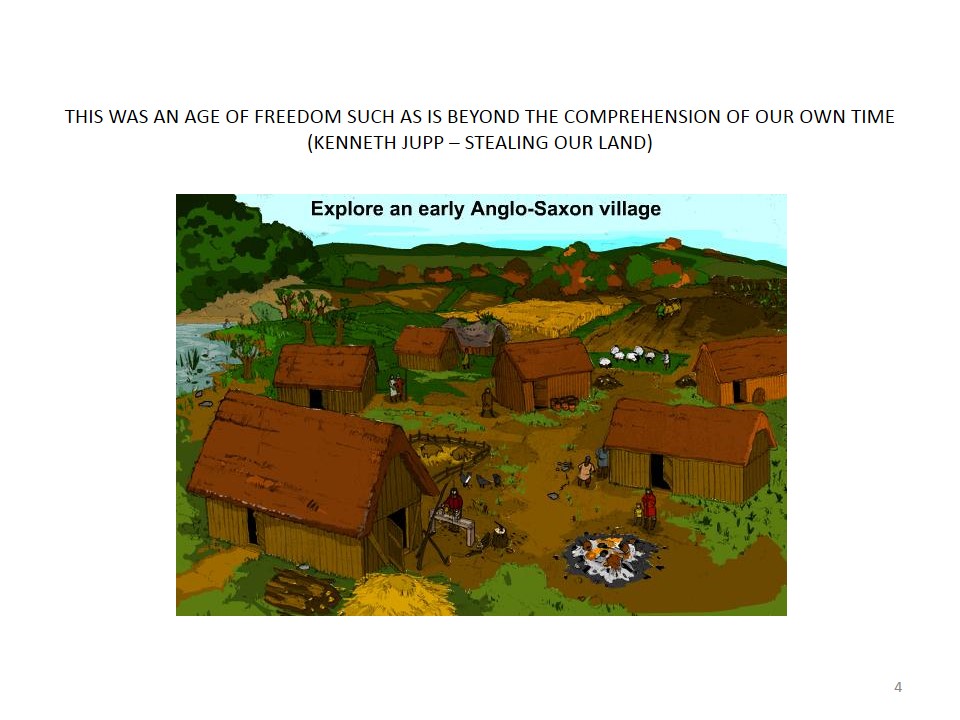 In Anglo-Saxon England, according to Kenneth Jupp, “there is no trace of nobility except the nobility of the kingly family………this was an age of freedom such as is beyond the comprehension of our own time”. (1)

Then came the Conqueror, and he quite naturally assumed that England    was “his” and distributed the land to his soldiers with duties attached.

The feudal system decayed and the duties lapsed Pandora Sale , but the idea that the land was “owned” took hold, despite the fact that when the king died, he did not take the land with him!

The power to own land was established in law, and rents were charged to those who needed to use the land. Thus it came about that “Some men work to maintain others who labour not. That is unjust.”  (2) 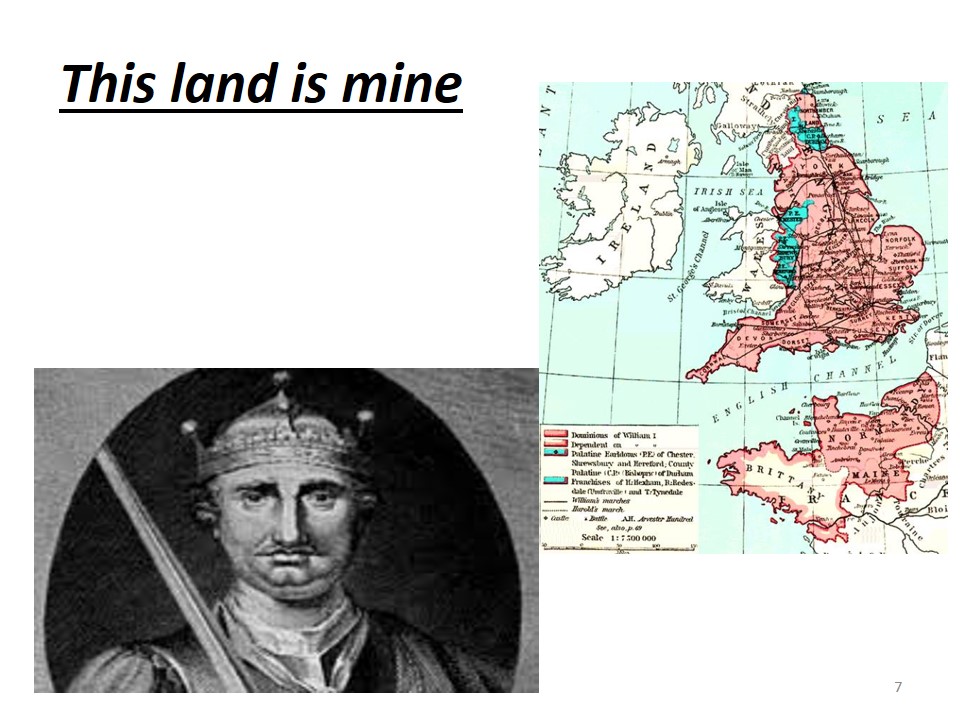 This confusion of usership and ownership is the beginning of inequality. And is it not amazing that we do not see it as wrong that some humans should be able to charge others for living or working on a piece of planet Earth? Why should the environment provided for free by nature be considered the property of some people and not others? What has happened to our sense of right and wrong?

So, there were hovels and palaces that give us a shockingly vivid picture of the inequality resulting from the division of the human race into the wealthy who owned land and the poor who did not. 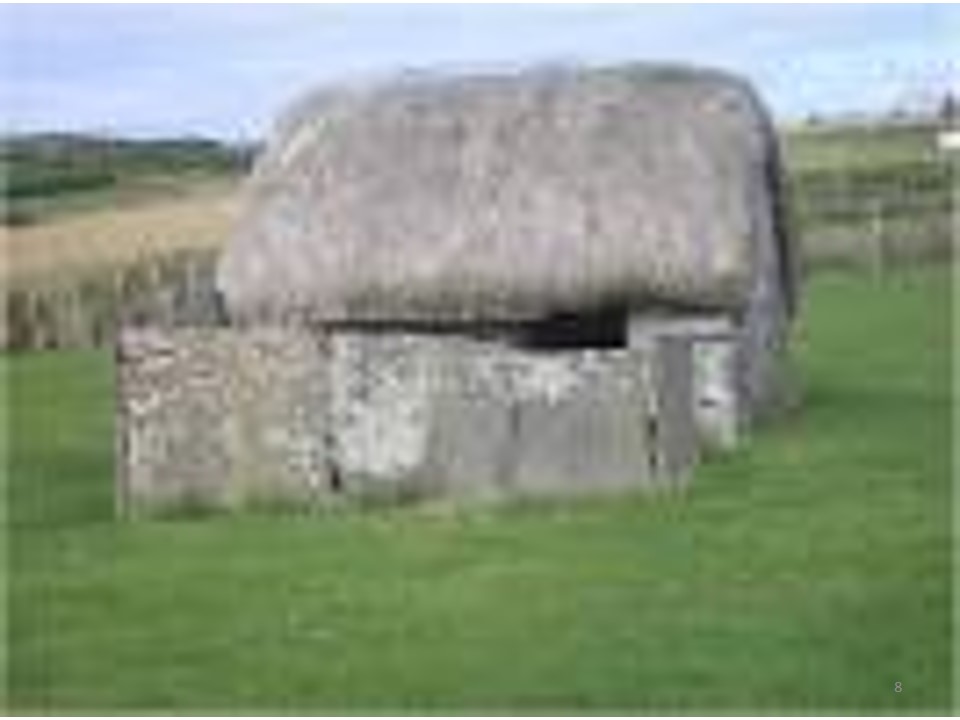 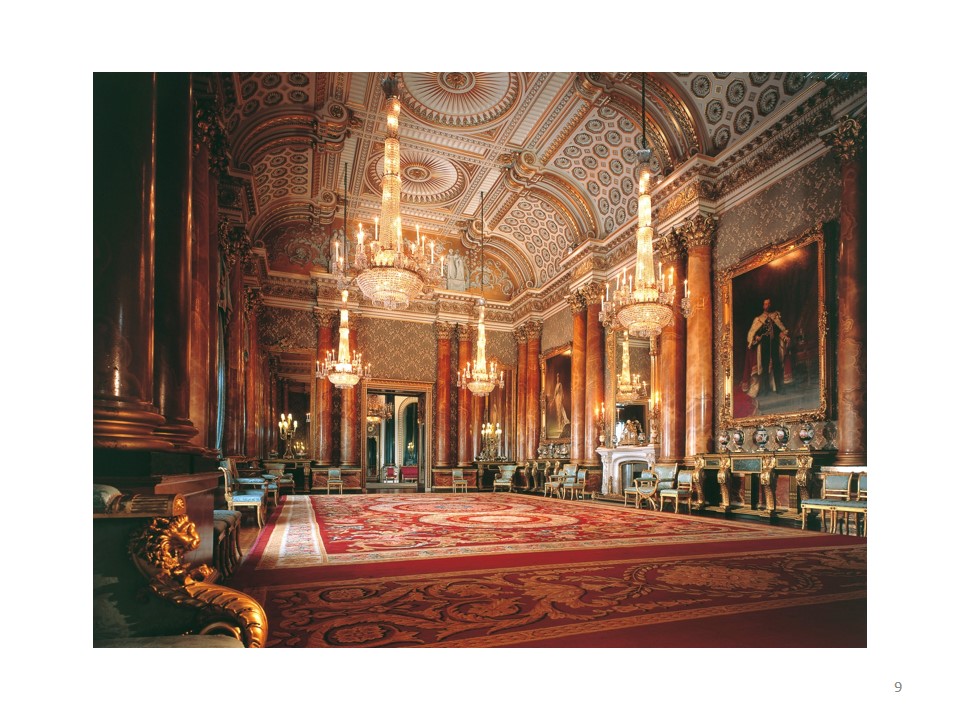 A more familiar picture from the TV series. At least by spending some of their money on an army of servants, the rich of Downton Abbey saved some people from the harder more dangerous work in mines and factories. 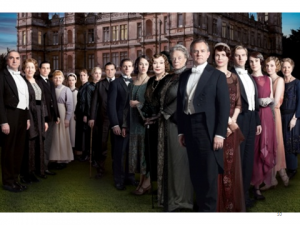 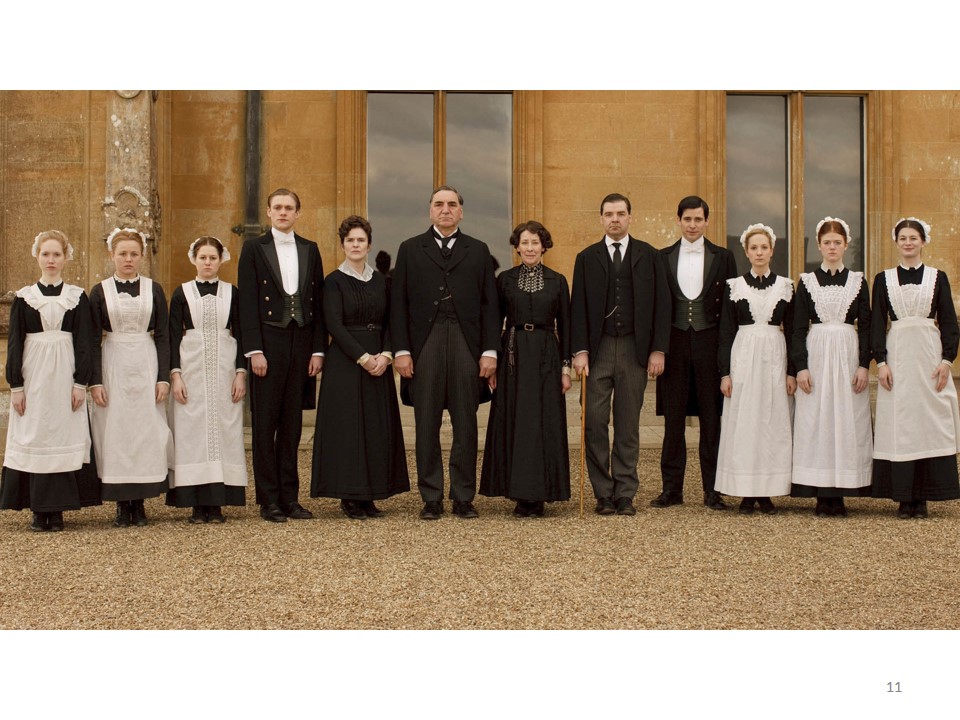 Inequality due to the unjust distribution of wealth has been with us for a long time. But now it has jumped to new proportions. Just 1% of the world population own 40% of the world wealth. (3) And in the last 20 years their share of incomes has increased by 60%.

The Tax Justice Network has estimated that Offshore Wealth of some $trillion belongs to 92000 of the planet’s riches individuals, representing not the top 1% but the top .001%, that is 1% of 1%! Further, they have said that “capital flight” out of Africa, for example has amounted to some $1264 billion, just one measure of wealth flowing into Tax Havens. (4)

At the same time we read that wages as a share of GDP have been shrinking. Here is a chart from Australia, showing that from 1911 to 2007 wages shrunk from 85% of GDP to 39%.

RISING TIDE ONLY FOR SOME!

So the question that must be put is “Where does all the rest go?”

A particular vivid part of the answer is provided by Bryan Kavanagh in Prosper Australia. This may be viewed at http://www.prosper.org.au/2009/01/28/ineffective-demand/ . Here the decline in the share of GDP in Australia since 1911 is shown, but the rest of GDP is also shown as Taxes and Rent.

The commentary shows how a badly designed tax system has finally choked off effective demand. 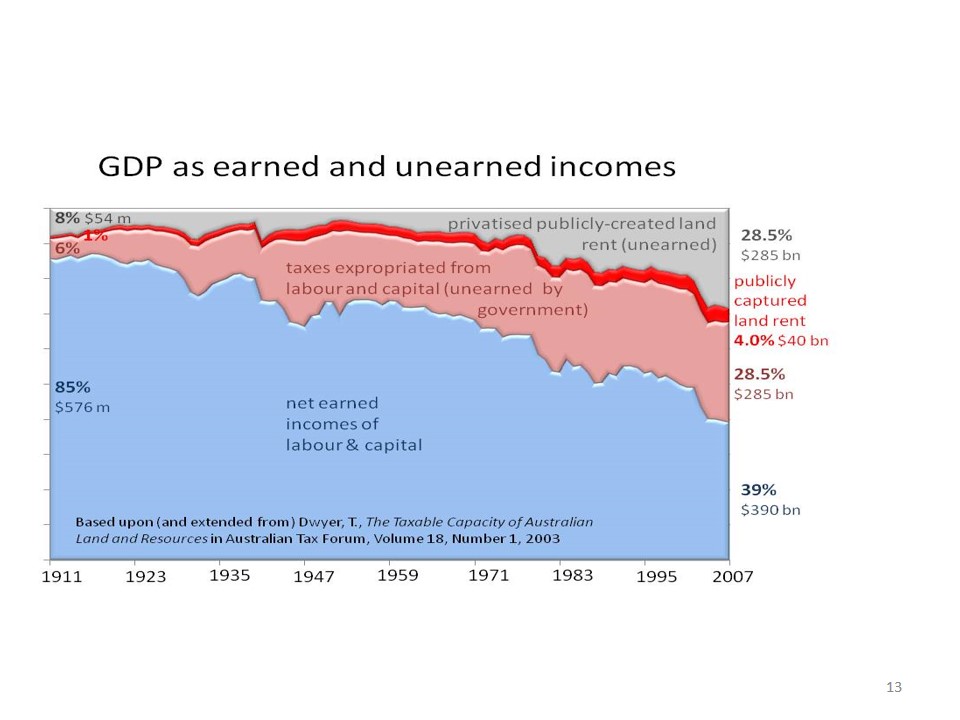 It would be most useful if a comparable study were made in Britain. The general picture would almost certainly be very similar.

As we shall see, this is in the context of a massive increase in productivity, but how is it that those who do the work share so little in the increase?

It is proposed to explore the effects of inequality in four areas of;-

Interest is a charge for lending. Usury has been described as “Interest in excess of risk”.
Money for investment is normally “extant money” while new money is created by banks mainly for mortgages, but also for business working capital.
We have a system in which for a thousand years we have poured out a large proportion of our earnings in rent paid to those who say they “own” land and claim the right to decide who lives or works on it. As a result they got very rich. So now we want to borrow some of it back for investment.
They do not want to be involved in running the business or taking any more risk than they have to. So we have created a system that gives the lenders much power.
Unfortunately no moralising about interest can possibly correct the power imbalance. So the borrowers have to pay what the lenders demand.
But there is a sort of interest market, and a limit set by what the borrowers can afford to pay. The banks in making new money for mortgages (70%) and working capital follow the market rate, influenced by the power structure. Banks and lenders also factor in the risk of non-repayment.
Now we land up with the fact that 90% of us pay interest, but only 10% receive it.
So, to cure the interest problem we have to cut the source of the lenders power, ie rent claiming.

2. What of Rent?
Here we need to distinguish rent of buildings and manmade things, from rent for that which is provided free by nature.
Recipients cannot consume it all, so they tend to invest, and want a return – see above.
So they invest, and seek security, which is readily supplied by the price of land, which price is boosted by the quantity of investment. As the price goes up, so does the rent! So now we have houses that few people under 35 can afford. This is not because they cannot afford the cost of the buildings but because they cannot afford the cost of the land underneath those buildings. So there is demand for renting. Rents go up. So land prices also go up. Round and round we go!

So, to cure the rent problem we have to divert the rent from those “owners” and use it as a substitute it for the damaging tax system we devised to avoid collecting land rent for public purposes.

3. What of Taxation?
The system we have is concentrated on taxing employers through the wage bill. This damages all businesses that are labour intensive. It also makes production costs uncompetitive as compared with other countries. Here are three charts to illustrate the damage done by our tax system.

Diagram 1.Eight similar sites in size and labour applied, but with differing advantages such as infrastructure, Transport, fertility, and other factors external to the sites themselves, leading to greater or less productivity, or “added value”. 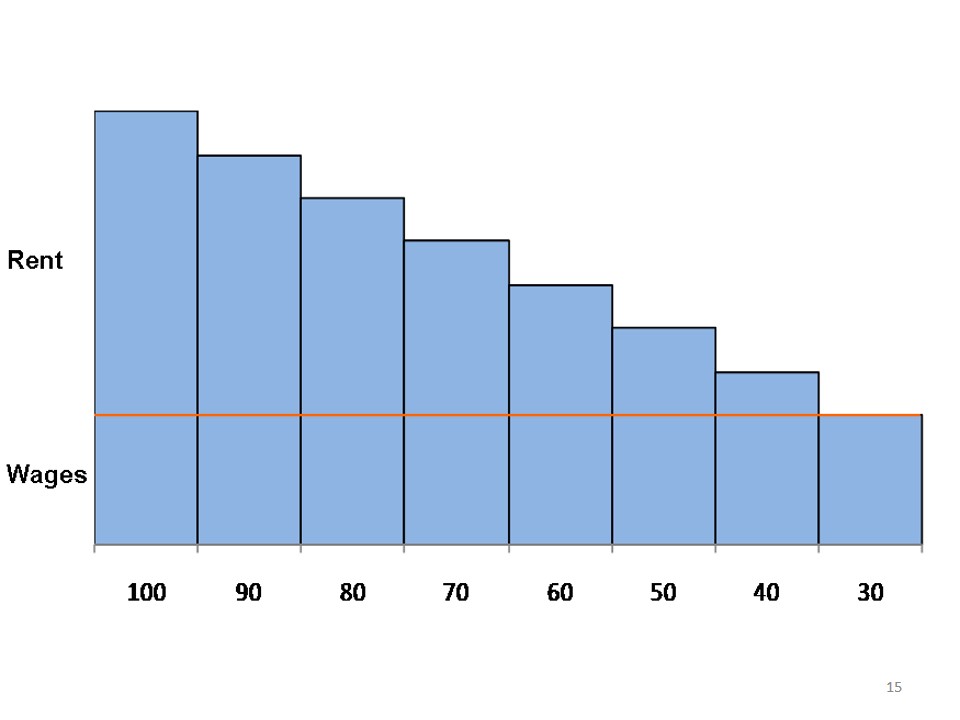 The level of wages will be set by the least productive site, in conditions where other sites are freely available. The excess is termed economic rent.

Diagram 2. Now tax has been applied at 50% of wages. Two sites have gone out of business, and another is just hanging on. Much of the taxes have to be spent on keeping those from the two sites from starvation. 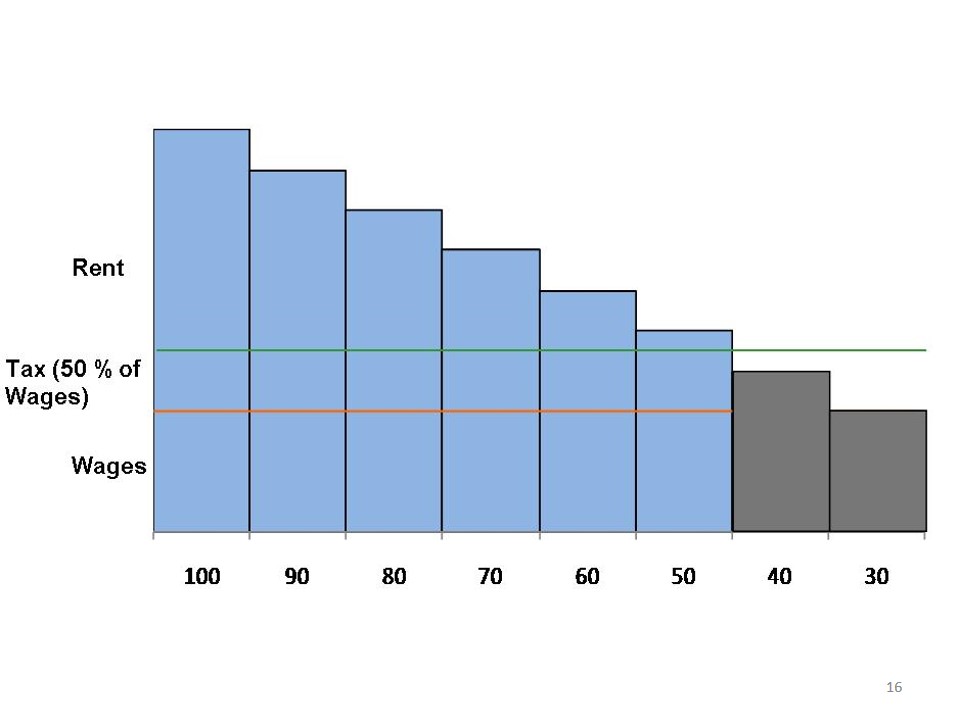 Diagram 3. Tax has been applied, instead of the previous taxes, at 50% of rent. Sites 7 and 8 stay in business, and no tax is required in amelioration of poverty. 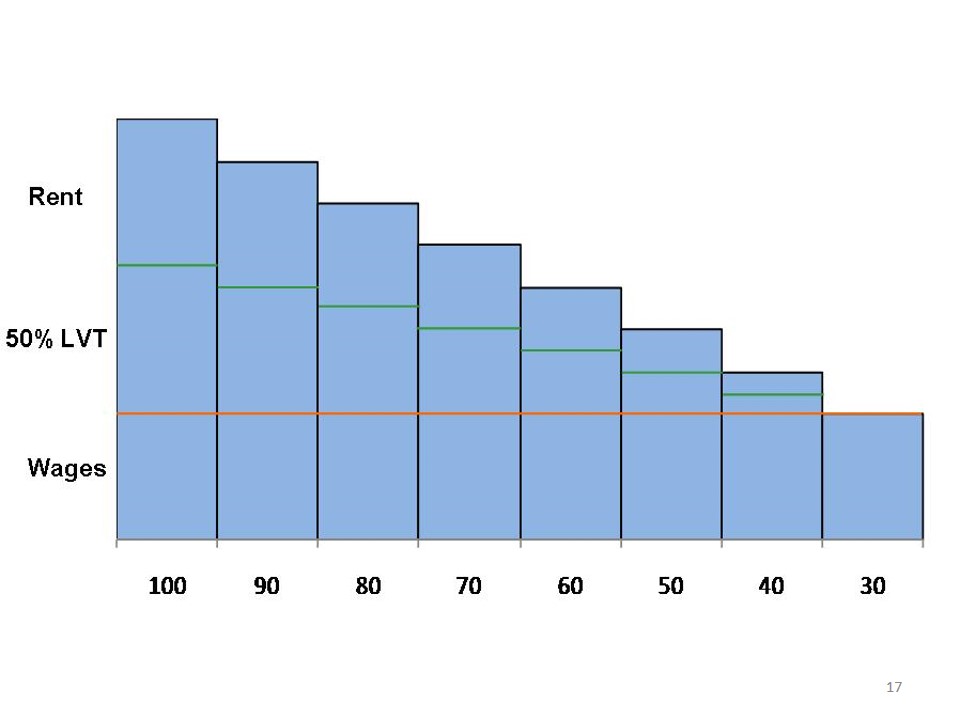 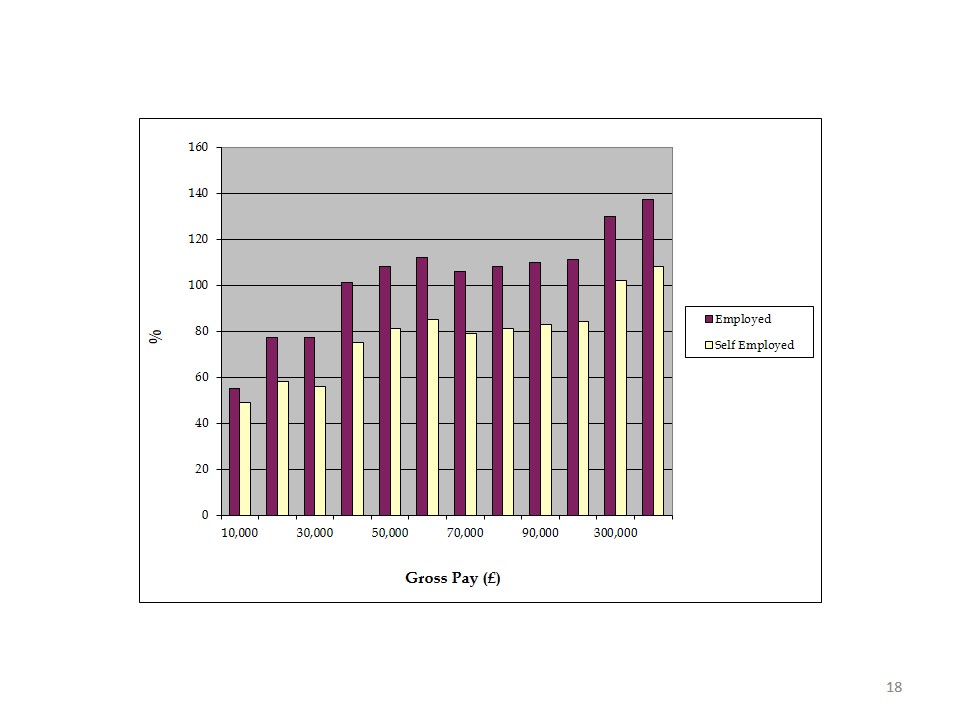 For the range of Gross salaries shown at the foot, the vertical bars show the amount of tax the employer has to bear over and above what the worker actually enjoys as a result of his work. The red bars reflect the situation of employees, while the yellow bars show that self- employed people cost less to use.

What are those to do who lose their jobs? The free land they need is not available.

So, we have welfare state. This means we have more taxation, so we then have more unemployment.Round and round we go!
So, to cure the taxation problem we have to go back to the natural source of public revenue.

Money is principally a means of exchange. Nowadays we exchange everything that we make for everything we consume. Also, money is needed to exchange our production for housing.

The increase in production has been enormous. I am indebted to Haydon Bradshaw for the following examples.

In 1733 the flying shuttle doubled production

In 1764 the spinning jenny could spin 8 threads at once.

By 1870, with the sewing machine, productivity has increase by more than 500%. 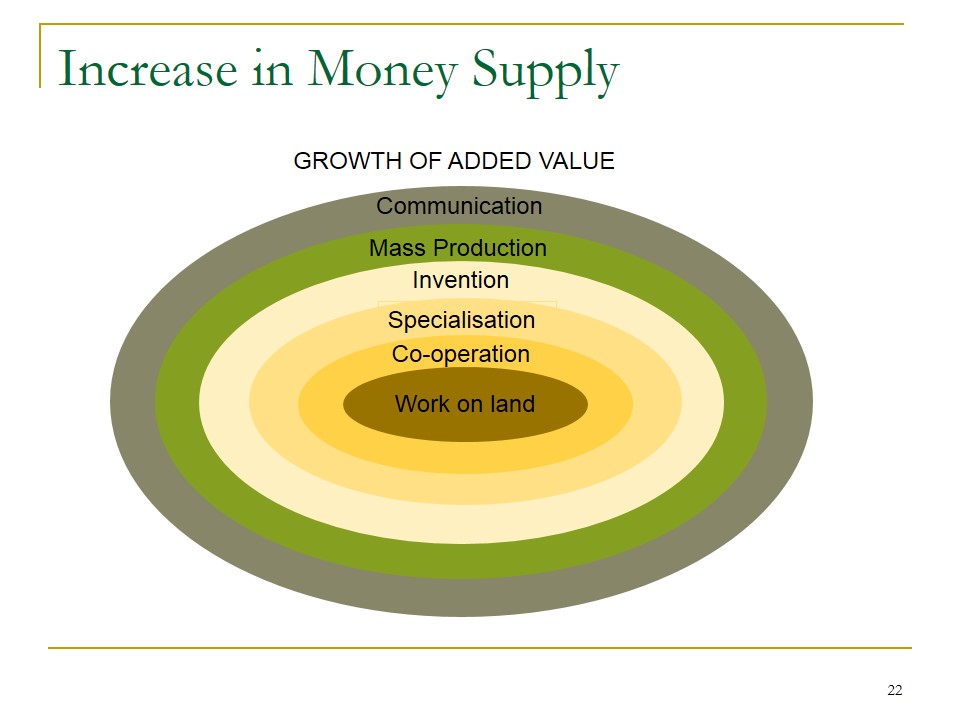 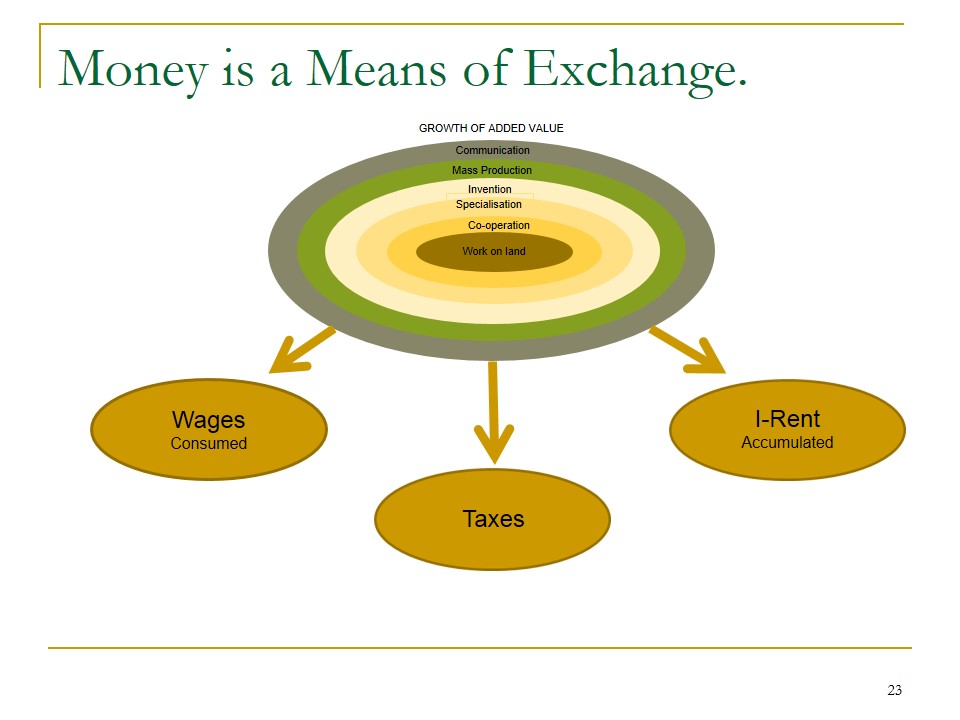 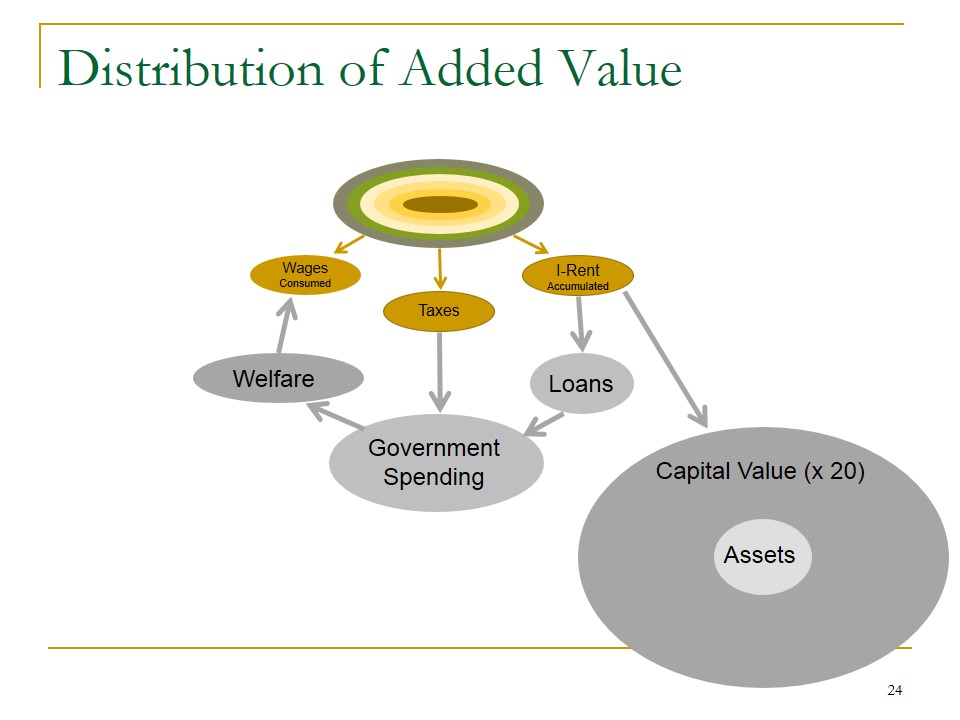 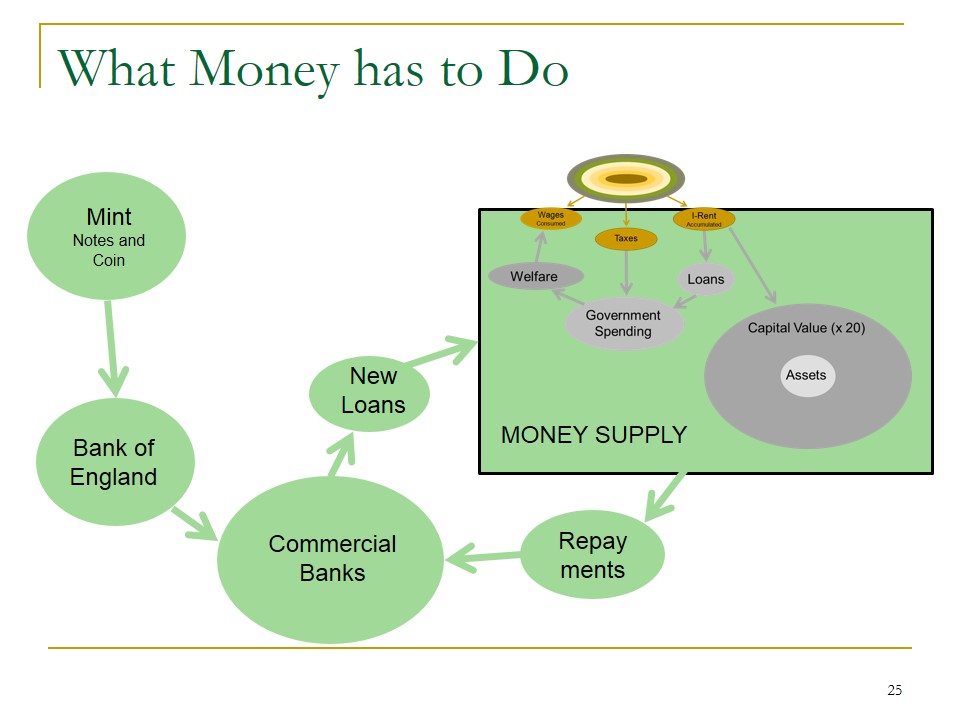 Housing goes up, see above, so more money is needed. Production also goes up with new techniques, but much of the product is claimed by “owners” of land. This creates “insufficiency of demand”because the rich cannot consume all they get.

New money is created by lending it, and 70% of the loans are for mortgages, which are for terms of 30 to 50 years. So the amount of money created gets larger with every increase in land prices. I have use a ratio of 1:20 or 5% to express the difference.

(The loans must be repaid. If not repaid, the lender suffers a bad debt, and the debt is repaid out of “extant money”.)
The government is in a rather more fortunate position than a householder, though, when needing to borrow, because lending to the government is seen as a safe investment and many of the rich are happy to do so. 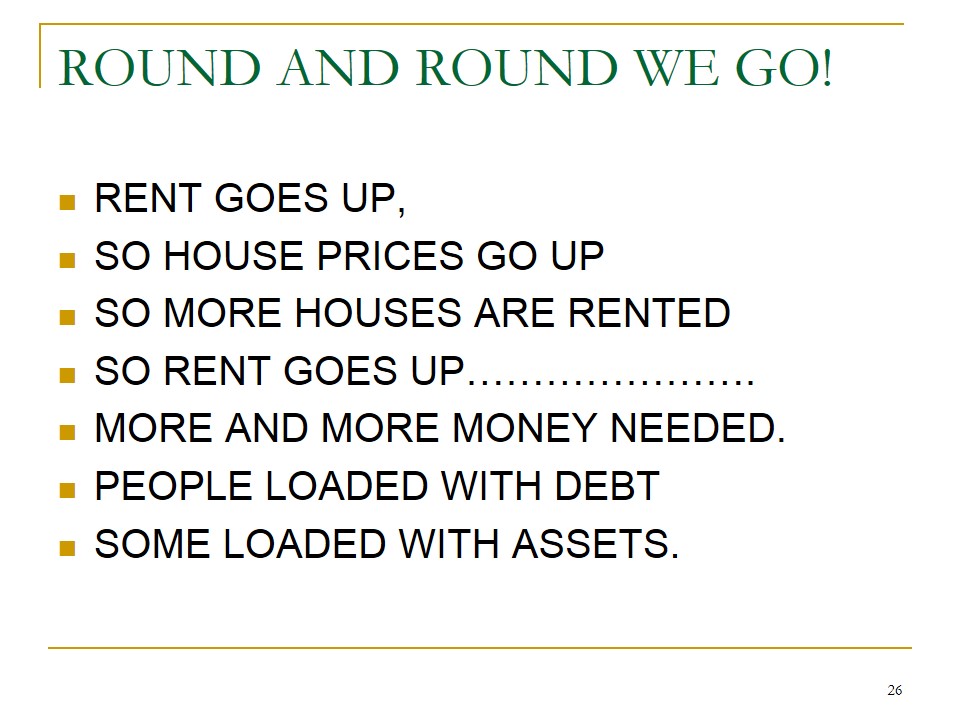 So, to cure the money problem we have to stop the accumulation of wealth in a relatively small number of people.

So, the problems of Interest, Rent, Taxation and Money all come down to the same thing, namely the accumulation of wealth in the hands of those who claim to “own” the free goods of nature.

What we observe today is the result of the immoral theft of people’s work to pay to those who claim to own the free goods of nature. We have done this for a thousand years. Although we may tinker with the effects, it is unrealistic to think that any substantial change can take place without dealing with the cause of inequality.

We can escape many of the problems we have by simply refunding the benefit of location to the community and remove nearly all of present taxes. Location Value Refund is the key.

We can apply some simple tests to any proposals for reform;-

Any reform must pass these tests;-

(John Stewart, A Novel, “The President”) 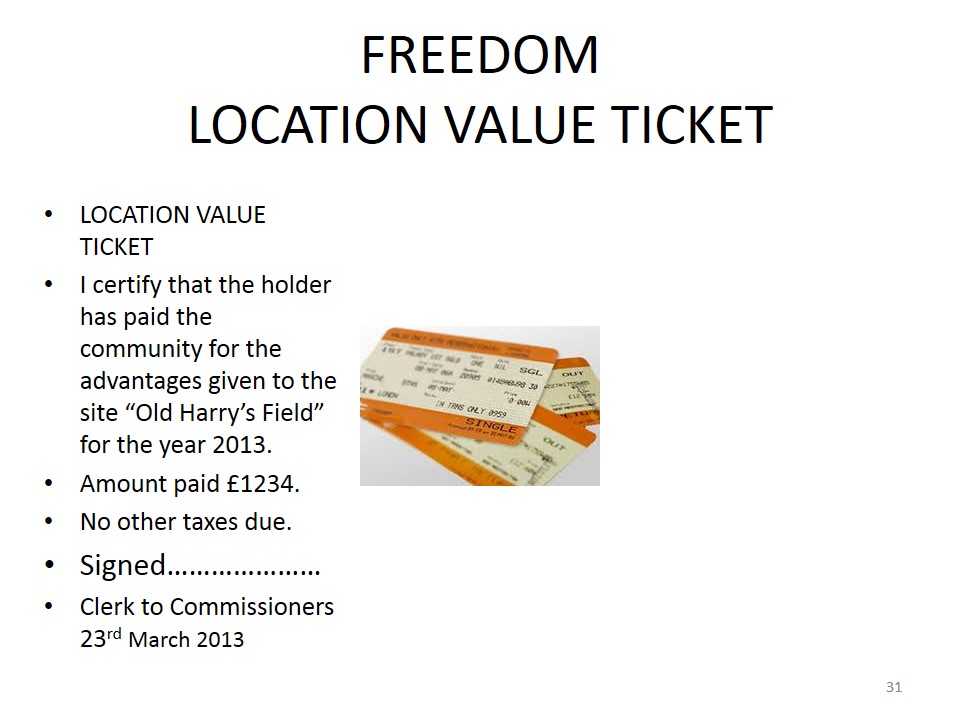 No other taxes due!

1 thought on “SA19. INEQUALITY – CAUSE AND CURE by Tommas Graves”