We are grateful for this example of land appropriation, and at the end will add our comments on how the proper collection of public revenue would bring justice.

– an exploration of land ownership through contemporary art.

StoreyG2 is a small contemporary art organisation based in Lancaster, in north west England. In 2014-15 we ran a project researching land ownership and its effects on people’s lives. “Landed (Freeman’s Wood)” is centred on a plot of land where the interests of a local community collided with those of global capital. 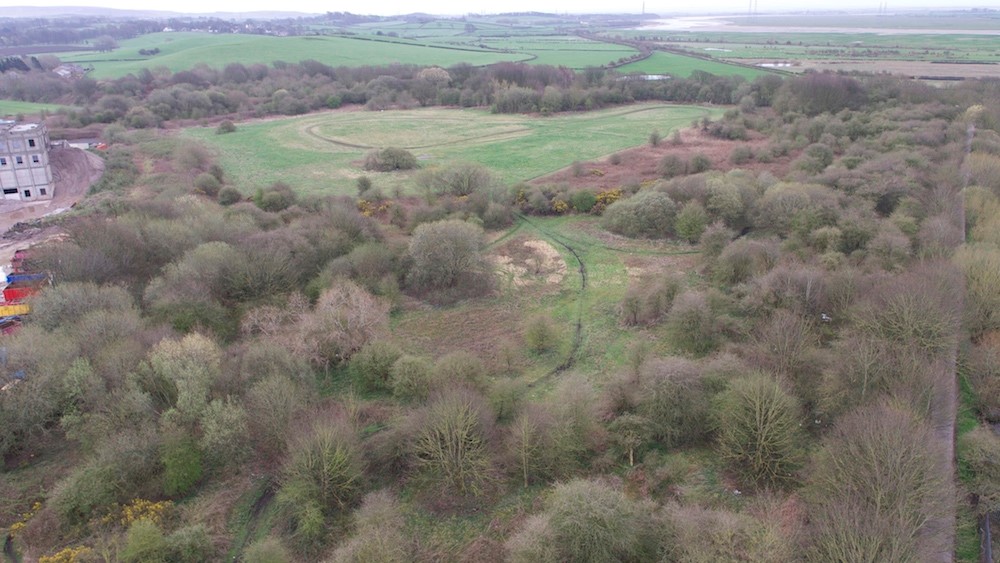 Ownership of land is fundamental to all political structures. The unequal ownership of land provides owners with social and economic power.  In the UK about 70% of the land is owned by 0.7% of the population.

However, landownership is a hidden political topic. Recently, in his introduction to a review of a book about landownership, Ferdinand Mount, a former conservative MP wrote: “In this case, the elephant is the room. There can be few enormous subjects more often dodged than land ownership. It is the great ignored in politics today.”

Meanwhile Dr Jason Beedell, Head of Research at Smiths Gore, Property Consultants, reports that: “2014 continued farmland’s strong rise in values that started before the recession and has continued since 2009, which has made land one of the best performing assets of the last five years. …bare land values rising by 58%…”

For several decades, many artists have been working outside galleries in search of a more interactive social role. These artists aren’t interested in creating luxury goods for rich people. Instead they’re conducting extended research projects in which they engage community participants to address a range of social, political, environmental, and economic issues.

Land has been a subject for artists for centuries. One of the earliest functions of landscape painting was to provide evidence of ownership, like an entry in a land register. Much later, Thomas Gainsborough’s painting Mr and Mrs Andrews (c.1750) shows two landowners on the land they own. In the late 20th century artists started to work directly in and with land, including Land Art, Site-specific Art, and Environmental Art.  More recently, artists have engaged with political and economic issues around land, such as Amy Balkin’s This the Public Domain project in California; Maria Eichhorn’s Acquisition of a plot of land in Munster; and Patrick Keiller’s series of films about landscape, place, politics, and economic history in England.

The Plot of Land – Freeman’s Wood

This project by StoreyG2 considers a plot of land known as Freeman’s Wood, on the edge of the city of Lancaster, in North West England. This site has been used recreationally by local people for decades, and regarded by them as common land. In 2012 a fence was erected around it, resulting in public unrest and reports in the local press.

The site was once part of Williamson’s linoleum factory, Lancaster’s major employer in the late 19th and early 20th century. Part of this plot was used as a factory tip, the remainder as a recreation ground for workers. Williamson’s gradually declined and finally ceased in 2001. Industrial use of Freeman’s Wood diminished as the factory waned, but recreational use continued. Local people have been using it since the 1950s for dog walking, biking, den building, tree-climbing, bird-watching, picnicking, and football. It is also home to a wide diversity of wildlife, including deer.

The plot is now owned by a property development company which is registered in Bermuda and whose directors are thought to be based in Hong Kong. The director of the planning consultancy company acting for them is chairman of the polo club where members of the royal family play, and is a friend of Prince Charles. So this scrubby patch of land on the edge of town has direct links to national and global power structures. 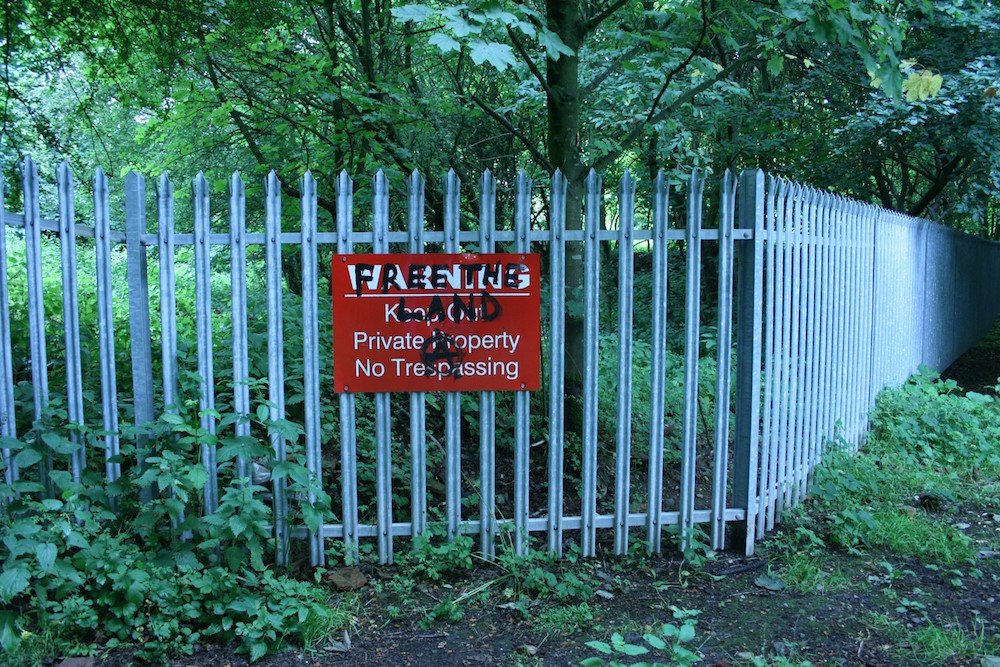 Spiked metal fencing was installed around it in 2012, together with Warning-Keep Out signs. Various tree houses, and a complex system of bike ramps constructed by local people, were destroyed. There was public outcry, the signs were rapidly and creatively defaced, and local people submitted applications for Town Green status and three designated public footpaths. Lancaster City Council imposed a Tree Protection Order.

This situation at Freeman’s Wood offered an ideal illustrative example for an exploration of the issue of land ownership. I succeeded in obtaining funding for an art project, and started by collecting extensive information about landownership and the history of this plot.

I appointed two Lancaster-based artists, Helen Hicks and Rachel-Ann Powers, to contact and interview local people about their memories of Freeman’s Wood and their wishes for its future. They recorded interviews with more than 30 people. Here are a few short quotes:

With a space like Freeman’s Wood you can just make it up as you go along. It’s a creative space for kids to do whatever their imagination tells them they can do.

We used it as our playground. We used to swing in the trees and bike-ride along the paths. We would act out the film we had seen that week. We would be Tarzan in the trees one week, sword fencing the next.

Local BMX riders had modified the footpaths in the wood to make a bike course. They had made artificial hillocks and ramps. They were wonderful, made out of pallets and tree stumps. 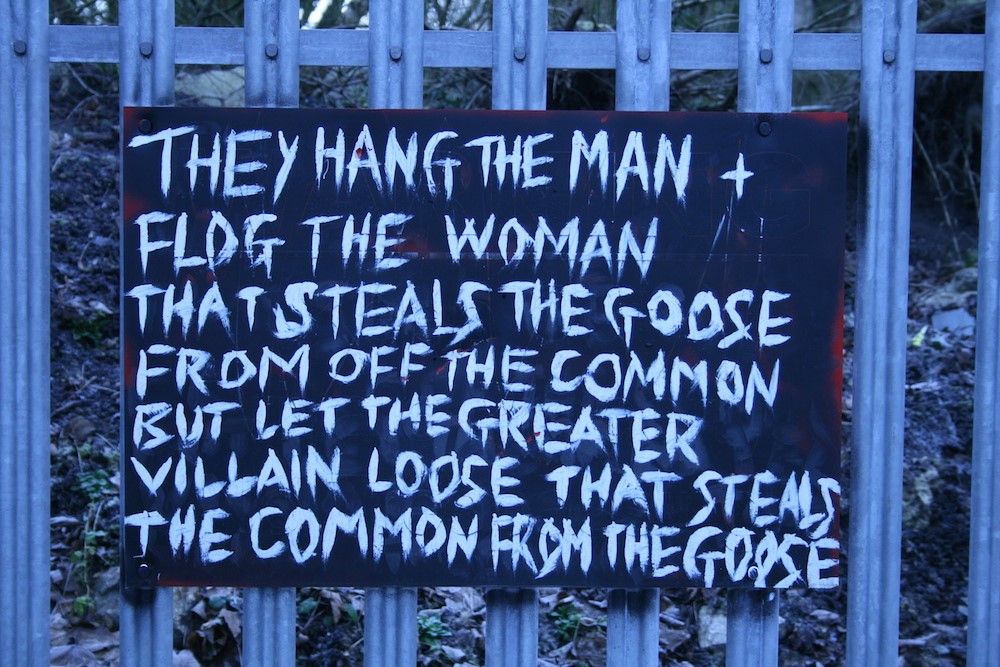 I selected artists Layla Curtis, Goldin+Senneby, and Sans Facon, for this project because they produce high quality work, have international reputations, and their approaches are appropriate for the topic. I wanted the project to reach a large audience, so I asked them to produce artworks in forms suitable for distribution on the internet, rather than objects for display in a gallery.

Layla Curtis makes artworks about maps and mapping, and explores boundaries, both physical and metaphorical. She has undertaken projects in the Antarctic and the Borneo jungle.

Layla, based in London, decided to produce an i-Phone app that would highlight the role of the fence. First, she GPS mapped the fence, then recorded conversations with locals about the site. Memories of the recreational use of this land over recent decades are intertwined with discussions of issues of land ownership, trespass, territory, common land, and activism.

The conversations were conducted on site, and GPS mapped, so users of the app, TRESPASS, listen to them while walking where they were recorded. Three of the audio tracks were recorded outside the boundary and are available to listeners anywhere in the world. However, to access those tracks which were recorded inside the fence, the listener must consider trespassing, and enter Freeman’s Wood itself.

Goldin+Senneby are a pair of artists, based in Stockholm, whose work addresses bureaucratic and financial systems. They engage other people to present their work, but the artists are absent, reflecting the public absence of manipulators of social and economic power, such as landlords.

G+S decided that buying a plot of land was to be a core component of their project. They said, “We need to become complicit in what we are investigating.”

Goldin+Senneby used this land as a stage from which to present ideas about landownership. G+S commissioned a play script from playwright Pamela Carter, which imagines the history of this plot of land, exploring various aspects of landownership in England. Their piece, A3 – A PLOT, presents a fake estate agent’s For Sale details. The play script forms the apparent estate agents’ description of the plot of land.

Sans Façon is French architect Charles Blanc and British artist Tristan Surtees. Their work explores the complex relationship between people and place.  They “…like to see the role of the artist and art as a catalyst in a process of raising questions and inviting one to look and think differently about a place, hoping to create an opportunity rather than an inanimate object.”

They have created a board game about landownership. FREEMAN’S WOOD – THE GAME involves verbal negotiation between the players, who take on roles such as Developer, Councillor, or Community Activist, and have to adopt the interests of the stakeholder. Cards are presented that feature events which may occur. Players react to the events, and try to influence other players, and gain their support. It is a game of strategy, influence, and compromise.

This game for 3-8 players can be printed out on A4 sheets, and is easily assembled.

All three artworks and full details of the project are on our website (www.storey2g.org.uk).

A short introductory video features aerial footage of the site from a drone (www.youtube.com/watch?v=Yxebw_rC7I8).

The aim of this project is to raise awareness and discussion of landownership and its effects on people’s lives. We believe a key role of art is to imagine how things could be different, and to communicate with a wide audience.

What has been done here is probably perfectly legal, but illustrates the way in which the law has been perverted to unjust results. The owners have recognised that this piece of land has acquired a development value, and have set up a scheme to enrich themselves in such a way that little or no taxation will be due on their profits. So, do we say “good luck to them” and pass on , or do we look deeper?

The first thing to note is how the increase in value has come about. We may quote Winston Churchill and one of his speeches in 1909.

“Fancy comparing these healthy processes with the enrichment which comes to the landlord who happens to own a plot of land on the outskirts or at the centre of one of our great cities, who watches the busy population around him making the city larger, richer, more convenient, more famous every day, and all the while sits still and does nothing. Roads are made, streets are made, railway services are improved, electric light burns night into day, electric trams glide swiftly to and fro, water is brought from reservoirs a hundred miles off in the mountains – and all the while the landlord sits still. Every one of those improvements is effected by the labour and at the cost of other people. Many of the most important are effected at the cost of the municipality and of the ratepayers. To not one of those improvements does the land monopolist as a land monopolist contribute, and yet by every one of them the value of his land is sensibly enhanced. He renders no service to the community, he contributes nothing to the general welfare; he contributes nothing even to the process from which his own enrichment is derived. ”

We may well ask, along with John Stewart (1) “What is Location Value?”, “Who creates it?”, and “To whom does it belong?”, and the situation becomes clear. The law has allowed the legalised theft of value created by the community.

We say that everybody who wants the monopoly of a piece of land should be required to pay for the privilege through a universal refund of the locational benefit arising on that site. If that is done, existing taxes can be greatly reduced or removed entirely.

The editors of this website agree that this form of theft should cease, and that the way to do it, is to take this community created value and with it, reduce all forms of taxation to nil. The method is called “Land Value Taxation” but is better understood as “Location Value Refund”.

Other articles in this website give fuller details, but we recommend SA 16. LVT – “What it is and what it is not.”