It is extraordinary how modern economics and politics never discuss the meaning of work. Yet if there is one argument above any other that ought to persuade anyone that George’s remedy is worth applying, it is that it would change the status and meaning of work. In the closing chapters of Progress and Poverty George writes:

The fact is that the work which improves the condition of mankind, the work which extends knowledge and increases power, and enriches literature, and elevates thought, is not done to secure a living. It is not the work of slaves, driven to their task either by the lash of a master or by animal necessities. It is the work of men who perform it for its own sake, and not that they may get more to eat or drink, or wear, or display. In a state of society where want was abolished, work of this sort would be enormously increased. (Book X, Chapter 4)

For most people today work remains driven by “animal necessities”. A recent survey shows that the average rent for a home in the UK is now 60% of income. At the same time wages are being driven down by zero-hour contracts which circumvent practically all employment legislation by defining the person as a ‘worker’ or as ‘self-employed’ rather than an ‘employee’. Most zero-hour contracts are in the hotel and catering industry, supermarkets, health care, public services, and not-for-profit organisations. END_OF_DOCUMENT_TOKEN_TO_BE_REPLACED

Is any study simpler than economics? A child could grasp it . Our difficulties arise·; stream and flow from the superstitions and  prejudices with which we surround it.

A voter who votes in ignorance forges the chains which bind him .All who  conduct business in ignorance inflict the injustices they suffer and are confounded by the confusion they cause. If the know­ledge necessary to good government were vouchsafed only  to a few, uniquely gifted to follow it, there would be no end to injustice and confusion. But this is not so.

The book of economics lies open before us .Its language is simple and its message clear. We may read it, not in any library , but in our daily lives and in our essential relations v1ith nature and each other. Let us look at it together .Lend me your imaginations so that our sight may be insight and our seeing understanding. END_OF_DOCUMENT_TOKEN_TO_BE_REPLACED

It is not generally understood that the vexed role of money in our society is due entirely to its underpinning by the great vexed, unresolved and ultimately all-underlying land question.

The best key to understanding this is undoubtedly the pictorial presentation of a great natural law: the Law of Rent.* << which can be found at www.henrygeorge.org/rent1.htm >> But it can perhaps also be quite well understood if I quote from the introductory passages to its classic version:

The Iron Law of Wages — The return to labor, however great the potential of the land that is worked, and however great the individual effort put into the work, will never be greater than the return available from the most marginal land in use. END_OF_DOCUMENT_TOKEN_TO_BE_REPLACED

LAND REFORM achievements on Taiwan have attracted  widespread attention. Countries of   Southeast Asia, the Middle East, Africa, and Latin America have sent representatives  to  make on-the-spot inspections or have requested cooperation  and the dispatch of Chinese personnel to help them solve their land problems.  Foreign visitors  have  shown  a  keen  interest  in  our   program.   Consequently, it is hoped  that  these  pages  will  make a small contribution to better understanding of Taiwan land reform and serve  as  a reference  for  those who  want  to carry out similar projects.

A study  of  Chinese  history  for  the  last  2,000  years shows recurring  pattern s of  war  and peace.    Many  causes may  be  listed, but  the  most  important  is  inability  to  maintain  a  proper  balance between  land  and population  for  any length  of  time.  Whenever population increased to a point where land was insufficient, violent uprisings  broke  out  and  civil  wars  ensued.    But  with  resulting reduction of   population   and  restoration   of   the land-population equilibrium,  another  period  of  social  and  political  stability  would begin. Lasting peace and stability are not possible until this vicious cycle has been ended. END_OF_DOCUMENT_TOKEN_TO_BE_REPLACED

ABSTRACT. Land ownership, as commonly understood today,  originated with the enclosure movement during the English Tudor era almost four centuries ago. Karl Polanyi referred to this “propertization” of nature as the “great transformation.” That land, water, and air was a social commons is now archaic and forgotten, and with it the classical economic concept of rent, which was, in theory, once paid to royalty as the earth’s guardian. Garrett Hardin’s article, “The Tragedy of the Commons,” raised alarm about the abuse and loss of this realm, and he recommended constraints and privatization to prevent this. Most  people view titles to landed property much as they do their household goods, but Henry George saw that the earth should be seen as a common resource and its value taxed to benefit everyone. This would restore economic equilibrium to market exchanges and pay for government services. The capture of natural resource rents can  supplant taxes on wages and capital goods, and it comports with all textbook principles of sound tax theory. This policy can be the modern replacement for the commons, and implementing resource rent capture is both economically and technically feasible.

Almost 50 years ago, Science Magazine published ecologist Garrett Hardin’s (1968) article “The Tragedy of the Commons,” now arguably the most widely cited and reprinted scientific article in recent history. As both history and parable, it purported to show how unattended and unprotected natural resources were exploited and ultimately destroyed by  villagers  in  16th-century  Tudor  England.  The  context  was   the  enclosure movement that drove peasants off the land into the cities and provided cheap labor for the ensuing Industrial Revolution. “The commons” was well understood as the shared land, usually pasture, that provided the space for grazing animals (Polanyi 1944). Hardin recounted in metaphoric terms an explanation of an ecological history of resource overshoot that has since been replicated countless times over. END_OF_DOCUMENT_TOKEN_TO_BE_REPLACED

The EU began as a noble concept. Unfortunately, it has consistently got the economics wrong, thereby sowing the seeds of its ultimate disintegration. The EU gave us VAT, CAP, a tariff wall and expensive food. It would be difficult to conceive of a worse combination, apart from capping them with a common currency. Bearing in mind that all taxes apart from LVT amplify the effects of locational disadvantage, it is not surprising that support for Brexit came from the country’s margins, not excluding parts of the South-East. This is not to suggest that those who voted to leave were making a reasoned and calculated choice. At that level it was a gut reaction, with nasty overtones. However, if one neglects one’s back garden, weeds will grow. Some, such as knotweed, can undermine a house. The UK has neglected its fringes for many decades.

The first of the ugly sisters is VAT.

Older people will remember the queues at customs when returning to the UK from abroad, asked if they had “Anything to declare?”. It is the EU wide VAT that has made it possible to do away with this unpleasant ritual. However, it replaced one bad tax with another. Purchase taxes promoted cross-border shopping and created the artificial crime of smuggling. VAT facilitated cross-border trading, but at a terrible cost. The EU requires it to be set at a minimum of 15%, apart from special exemptions. Contributions to the EU are based on a notional VAT yield, on the assumption that aggregate VAT is an indication of the size of a country’s economy. END_OF_DOCUMENT_TOKEN_TO_BE_REPLACED

Exit from the EU opens up the possiblity of some quick wins, sometimes referred to as “low-hanging fruit”.

One of the most malign features of the EU’s economic and fiscal policies is VAT. Governments can not reduce it below 15% or abolish it or replace it with a different sales tax or a different tax altogether. It is regressive and expensive to administer, especially for small business because of the amount of paperwork it causes. It is also vulnerable to fraud and avoidance. It adds to the government’s welfare bill as money has to be paid to the poorest people so they can pay it back to the government in tax. EU membership has prevented any discussion of the subject. Debate is always shut down with the killer statement that it cannot be changed. It is an important factor in the throwaway economy as it is charged on repairs, even to buildings. The issue has never been raised at EU level, not even by Green politicians. END_OF_DOCUMENT_TOKEN_TO_BE_REPLACED

Current economic analysis and theory pays little attention to the actual locations in which economic activity is taking place. The benefits of a particular location include factors such as inherent fertility or proximity to natural resources, but the largest factor in a trading economy is that the work of the whole community confers a great advantage on particular locations. If individuals, firms or nations are allowed to claim this for themselves the result is a large, unfair and ever increasing disparity in wealth, unemployment and civil unrest.  This article introduces a quantified analysis of the economic potential of the major countries in Europe. It describes how these changed with the formation of the EEC and subsequently the EU, and shows how this effect provides riches for some and condemns others to poverty. The paper also describes how this unfair advantage is exacerbated by the Euro. Finally some possible solutions to correct this error and provide an equal opportunity for all to prosper will be outlined. 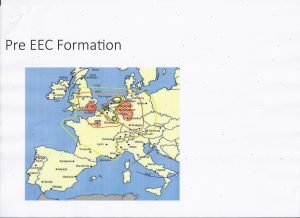 The original work on Location Theory is accredited to Von Thunen (1783-1850) a north German academic with formal scientific training and practical experience as a farmer.  He was interested in whether there was a natural location for particular forms of endeavour.  For the next century these ideas were developed in North America, especially with a view to determining the best location for new industries.  In the 1950’s Prof. Colin Clark was introduced to these ideas and he developed them further.  He implemented a major project to determine the effect on the UK manufacturing industries of joining the EEC and the results of which are outlined here. END_OF_DOCUMENT_TOKEN_TO_BE_REPLACED

The government of Finland is planning to be the first European country to provide to each adult citizen a basic income, replacing its existing welfare, social security, and unemployment payments. A pilot program is planned for November 2016, to be implemented by the Finnish Social Insurance Institution.

The replacement of qualified welfare payments with funds not related to any income, employment, disability, or age status was proposed in 1962 by the free-market economist Milton Friedman, as a negative income tax. It was partly implemented by the US federal government as an “earned income tax credit”. A basic income does not depend on the tax code, and eliminates the negative incentive of getting money by qualifying as poor, disabled, or unemployed. END_OF_DOCUMENT_TOKEN_TO_BE_REPLACED