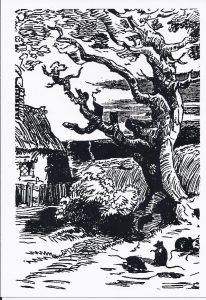 The Cat and Dick Twittingham

Once upon  a time there  was a cat and his master,  Richard Twittingham.

Dick  was determined  to make his fortune in London and planned to set off on the long walk from the Forest of Dean where he lived. But …

Outside a tavern in the year 1367, the first year in the reign of King Henry IV of England.

“Have you seen the cat?” asked Dick of the innkeeper.

“Do you mean THE cat?” enquired the innkeeper. “I don’t  understand,” said Dick.

“Ah, well, either you see THE cat or you don’ t,” said the innkeeper, going about his business.

“Of course I can see my cat when he is here,” snapped Dick, “he is black and white with four legs and a tail and goes by the name of Tom.”

“Ah,” said the innkeeper. “Whither are you bound with your cat, then?”

“So they are,” said the innkeeper, “so they are for them what can see THE cat.”

“Innkeeper, I’ve had enough of this nonsense . Either you explain what you are talking about or I will have no_further truck with you.”

” I see you have spirit,” said the innkeeper. “Rest ye awhile at my tavern and I will let you into a secret.”

“A secret!” said Dick, wide eyed with interest. “Gosh, do I have to keep it for ever and ever? Are the streets of London really paved with gold, then?”

“They be that,” whispered the innkeeper,” but only those with eyes to see justice and a heart ready to understand natural rights can see who creates the gold and those that pocket it for their own gain.”

“Speak on, my good man,” said Dick, “for I am as eager as anyone to see a fair distribution of wealth in society and poverty banished from this fair land of ours.”

And so it was that the innkeeper  explained  how the streets of London were  paved  with gold, but that only a few privileged folk, them what had titles, them who lived in luxury in fancy London Houses and great estates in the country and what did no work yet were rich and powerful were able to acquire the gold, while them that were called peasants and common people scraped but a bare existence on low wages, heavy tithes and, to cap it all, lived in disgusting  hovels, many dependent on charity.

“Ye see, young fellow,” said the innkeeper, “after the Conquest the land was given to a handful of the bastard’s principal knights who kept the people in what amounted to slavery, forced them to work for nothing on the lord’s land and made them pay rent.
But God never intended the land to be in private hands. In Anglo Saxon times we were independent  Freemen  who  worked  the land  for ourselves  and  kept  the produce.  It be society that creates the value in land, and that value should rightly be returned to the community so it can grow and improve with everybody sharing the benefits.  Today  that value is taken – nay, stolen – by the descendents  of the Norman  Lords and  Barons.  They claim they own  the land  and this gives them  the power  to demand  rent from  the butcher, the  baker, the candlestick  maker  and  the innkeeper,  extracting  the most  they  can get  to leave their tenants with a bare living.  And  the threat of instant  eviction  if they are so much as a day  behind  with the payment.

“Trouble is that folks have become so oppressed that they suffer the burdens but don’t see the chains. You mark my words, young lad, one day there will be a revolt and the peasants will rise up and free themselves from oppression. (Indeed, the Peasants’ Revolt took place I 4 years later in June 1381, in the first year of the 14-year old King Richard 11) I just hope and pray that when the time comes they don’t go for the wrong target and put the blame on them what employs them. Capitalists they calls ’em. It’s not the capitalists. It’s the lords and landowners what be the tyrants – they are the ones that reap where they have not sown and fill their pockets with the fruit of other men’s labour.”

“And scrape the gold off the streets,” cried Dick. “You mean it is the Land….” said Dick before the innkeeper interrupted.”Just you be careful. Now you know the secret you better hold your tongue when you get to London less you loose it in some dark alley.”

And so it was that Dick came to understand natural law and the importance of land in society. That land value is created by the community and, if collected as land rental for the community, then society as a whole would reap the benefits of a growing population and demand for more goods and services. He also came to appreciate that all improvements to the infrastructure, paid for by tax impositions on the poor, go to increase land value and provide an opportunity for the landowner to increase the rent of properties they let out to farmers and townsfolk. So the poor work their socks off while the landowners dress themselves in silk and ermine.

Historical note: The expression ‘do you see the cat’ was a popular saying in the early 20th century among the followers of Henry George, the American political economist who recognised that poverty and unemployment resulted when access to land, the essential element of production, was appropriated by a small number of landowners and speculators while the majority of people competed with each other for work and were forced to accept the least wage they were prepared to accept. George was one of the foremost exponents of the theory that if land value was used to pay for public infrastructure there would  be no need for taxes on wages, production and exchange.

This little tale will hopeful stir your desire to understand the basic economic principles explained in Progress & Poverty- the book written by George in 1857 that later inspired Winston Churchill, Lloyd George, Asquith and the Liberal Party to advocate Land Value Taxation in the Budget of 1909. If you want to see the cat and discover for yourself how to make a more fair society, then why not become a regular visitor to the sites below. Once you see THE cat you will realise the causes of the problems facing people in every country of the world, and, more importantly, how they might be solved.