Virtually all taxes today are, to a greater or lesser extent, passed on ­that is, the burden of the tax is not carried by the person who initially pays it but by somebody else. 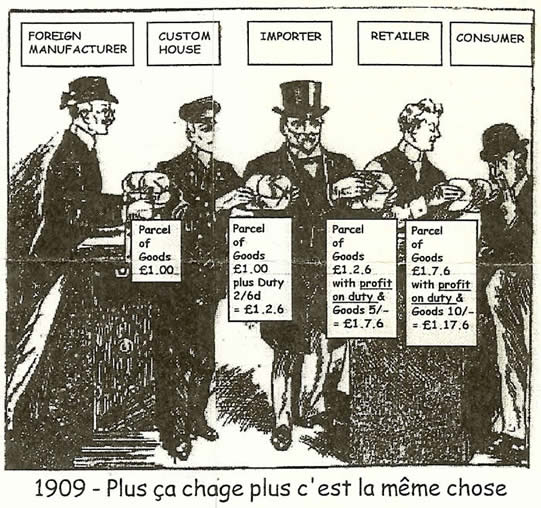 In many cases, this is quite intentional. When VAT is applied to goods or services, the tax is charged on the person providing those goods or services, but everybody expects that he will recover that cost by charging more. When taxes are imposed on drink or tobacco or petrol, or on goods imported from a foreign country, those taxes are automati­cally reflected in higher prices to the consumer.

To a considerable extent, ‘direct’ taxes are passed on as well. If income tax is increased, workers who are required to pay the extra tax soon demand more money from their employers in order to maintain their previous standard of living. The employer usually has to comply but he, in his turn, will usually increase the price of goods or services which he supplies.

Unlike other taxes, a tax on land values cannot be passed on. It is important, however, to be quite clear what is meant by a ‘tax on land values’. ‘Land value’ means the value of a piece of land alone, without including the value of any improvements – like buildings or crops or machinery – which people have put on that land. A factory or a farm or even a domestic house really consists of two entirely different things: the site itself, and the improvements or developments which people have put on that site. Each of those things has a market value. A parcel of building land, or an uncultivated field, has a price; while building land with a house on it, or a field with crops on it, has a higher price – the difference being the value of the improvements.

The unimproved value can easily be assessed preferably as an ann ual rental value. This value is not created by the landowner and can be collected by an annual land value tax (LVT) based on the rent it would com­mand.

A few examples will show why a tax on land values cannot be passed on by the taxpayer to anybody else.

Consider two shopkeepers, both selling the same kind of goods in the same town. One has a shop in a side street where land values are low, and therefore his LVT is low. The other has a shop in the High Street where land values are high, and therefore his LVT is high. If the second shopkeeper tried to raise his prices to pay the LVT, his customers would go to the side street shop instead of his. The reason shop­keepers seek High Street sites is not that they expect to be able to charge more for their goods, but that they expect to sell more of them.

Consider a farm worked by a tenant farmer who hires it from a land­owner on an annual tenancy. Suppose that the landowner is now charged LVT on the value of the site of the farm – not the buildings or other improvements, of course, but· the site alone. Could he demand more rent from the tenant farmer?

The tenant already pays as much rent as the landowner can make him pay. If the landowner tries to charge him any more, to pay the tax, the tenant will either move to a different landowner where the rent is lower, buy a freehold farm, or go out of business. The landowner knows this, and it is that knowledge which determines the rent. So the rent cannot be increased, and the land­owner must pay the tax himself.

Consider two manufacturers making similar goods. One has a factory on an expensive site; the other owns a factory on a cheap site. Can the first manufacturer raise his prices to pay for LVT? Again, plainly not. What determines the price he can charge is the play of competition, not the value of the site from which he is producing goods.

These are but three of many possi­ble examples which illustrate a very important economic rule enunciated by 19th century economists, and still as valid today as when it was written. In 1848, John Stuart Mill wrote:

”A tax on rent falls wholly on the landlord. There are no means by which he can shift  the  burden upon anyone else. It does not affect the value or price of agricultural produce, for this is determined by the cost of produc­tion in the most unfavourable circumstances those circumstances, as we have so often demonstrated, no rent is paid. A tax on rent, therefore, has no effect other than the obvious one. It merely takes so much from the landlord and transfers it to the State.” (*)

Mill was thinking mainly about agricultural tenancies, but the American economist and philosopher Henry George pointed out that one essential difference between land and other things is that the supply of land is fixed, while the supply of other things is variable within very broad limits.

This difference goes a long way towards explaining the different behaviour of land and other things in response to taxation. If, for example, more tax is put on tobacco, some people will probably reduce their consumption of tobacco, which will lead to a reduction in the amount of tobacco produced in the future. Alternatively, smokers may decide to smoke as much as before but to reduce their consumption of some­thing else – which will reduce the demand for that other commodity, and therefore the amount of it which will be produced. Conversely, a reduction in taxation is likely to produce an increased supply of that commodity. The same thing is not true of land, because the supply cannot be altered.

Another relevant factor is that most taxes impose the same burden everywhere in the country. If cars, computers or cabbages are taxed, there will be no local differences in how much the taxpayer will be required to pay. With land, however, there will be very big differences because different sites are of such widely different value. People producing from cheap, lightly-taxed land, will be in competition with people producing from expensive, heavily-taxed, land.

Why is LVT a good tax?

Just a few taxes on commodities are good and necessary. To give two examples, taxes on tobacco discour­age people from doing something which is likely to damage their health, while taxes on petrol are designed, in part, to reduce pollution of the environment. These taxes are good and necessary because governments wish to discourage consumption of the thing which they are taxing.

In most cases, however, taxes on commodities are not imposed with any object of discouraging produc­tion or sales, but in order to collect revenue. The effect of discourag­ing sales is an unintended by­product of the tax. Similarly, direct taxes, like income tax and corpora­tion tax, are not designed to raise prices of goods, although in practice they do. Nearly all existing taxes are, to a greater or lesser extent, brakes on production, largely because they are passed on. They also produce all kinds of indirect results which were unintended and often unforeseen.

By contrast, LVT in no way discourages production. Far from reducing the amount of land avail­able, it actually tends to increase it, for people owning idle land are encouraged either to bring it into use themselves or to dispose of it to someone who will. So the results of a tax on land values are intended results, while the results of most other taxes are largely unintended.

Furthermore, LVT is a just tax. Taxes on goods, and direct taxes as well, are taxes which fall on some­thing which the producer has done or made with his own efforts, or which the consumer requires in payment for the effort which he has made. A tax on land values, by contrast, falls exclusively on some­thing from which the owner derives benefit, yet which neither he nor his predecessors in title have ever made. What could be fairer than that?

George, Henry: Progress and Poverty. This is available in many editions. A recent      edition, edited and abridged by Bob Darke, Robert Schalkenbach Foundation, New York 1920.

2 thoughts on “TP3. The tax that cannot be passed on”