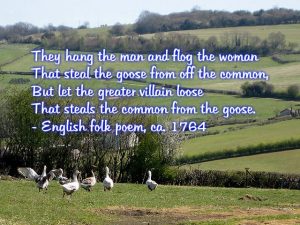 And time there was, ere England’s griefs began,

When every rood of ground maintained its man;

For him light labour spread her wholesome store,

Just gave what life required, but gave no more;

His best companions, innocence and health;

And his best riches, ignorance of wealth.

An ancient ape, once upon a time, disliked exceedingly to climb,

And so he picked him out a tree and said, “Now this belongs to me.

And bring the bulk of them to me, by claiming title to this tree.”

He took a green leaf and a read and wrote himself  a title deed,

Proclaiming pompously and slow: “All monkeys by these presents know.”

Next morning when the monkeys came, to gather nuts, he made his claim:

“All monkeys climbing on this tree, must bring their gathered nuts to me,

Cracking the same on equal shares; the meats are mine, the shells are theirs.”

“But by what right?” they cried amazed, thinking the ape was surely crazed.

“By this”, he answered; if you’ll read, you’ll find it is a title deed,

Made in precise and formal shape, and sworn before a fellow ape,

Exactly on the legal plan, used by that wondrous creature, man,

Unless my deed is recognised, it proves you quite uncivilised.”

“But”, said one monkey, “You’ll agree, it was not you who made this tree.”

“Nor”, said the ape, serene and bland, “Does any owner make this land,

Yet all of its hereditaments, are his and figure in the rents.”

The puzzled monkeys sat about: they could not make the question out.

Plainly, by precedent and law, the ape’s procedure showed no flaw;

And yet, no matter what he said, the stomach still denied the head.

Up spoke one sprightly monkey then: “Monkeys are monkeys, men are men;

The ape should try his legal capers, on men who may respect his papers.

We know who gathers and unmeats ‘em, by monkey practice also eats ‘em.

So tell the ape and all his flunkies, no man tricks can be played on monkeys.”

Thus, apes still climb to get their food, since monkeys’ minds are crass and crude

And monkeys, all so ill-advised, Still eat their nuts, uncivilised.

Sound the blast for freedom, boys, and send it far and wide,
March along to victory, for God is on our side,
While the voice of nature thunders o’er the rising tide:
“God made the land for the people”.

Why should we be beggars with the ballot in our hand?

God gave the land to the people.

Hark! The shout is swelling from the east and from the west!
Why should we beg work and let the landlords take the best?
Make them pay their taxes for the land, we’ll risk the rest!
The land was meant for the people.

The banner has been raised on high to face the battle din,
The army now is marching on, the struggle to begin,
We’ll never cease our efforts ’til the victory we win,
And the land is free for the people.

Clear the way for liberty, the land must all be free,
Britons will not falter in the fight tho’ stern it be.
Till the flag we love so well shall wave from sea to sea,
O’er the land that’s free for the people.

Cheer up comrades, look on high, Light is breaking in the sky

And the Glorious Truth to all will soon appear,

Which doth guide us in the fight, ‘Gainst the tyranny of might.

Land Monopoly from off the earth must clear.

On this principle we stand, that the values of the Land

Shall be paid into the Treasury every year.

How does it come about? How is it spent?

Are all the holders of the land the ones to take the most or all of this Rent?

Rent; Rent is generated by us all –

It is surplus generated by the ingenuity of Man

through intellect, emotion and by hand –

One World – One humanity;

with love and care and all its powers –

Rent is not mine, its Ours.